Pooky Quesnel returns to The A Word, BBCs groundbreaking drama centring around the family of an autistic boy. Pooky reprises her role as Louise for Series 2. Also recommissioned for a second series is National Geographic’s MARS. Cosima Shaw returns as astronaut Lesley in the innovative sci- fi adventure set in the perhaps not too distant future. Max Fowler will begin filming on State of Happiness an epic new drama series for Maipo Film exploring the Norwegian oil boom of the 1970s. Petter Noess Oscar nominated director of Elling is at the helm. Ken Bones, meanwhile, appears as the Papal Envoy across Season 3 of the hugely popular Versailles for Capa Drama and Canal+.
Back home Geraldine Alexander joins Benedict Cumberbatch in one off BBC 90 minute drama The Child in Time an adaptation of Ian McEwan’s novel about the grief and loss of a couple directed by Julian Farino. Scott Karim films Crazy Diamond (Electric Dreams: The World of Philip K Dick) with Marc Munden for Left Bank/Channel 4. Hywel Morgan films the E4/Netflix produced The End Of The F**king World based on the American comic book. Laura Rees plays Dotti and Melissa Vaughan Sear in The City and the City a Mammoth Screen production for BBC 2 with Tom Shankland directing and Howard Ward plays Gary Green in Sky Atlantic’s The Tunnel which returns for a 3rd and final series later this year. 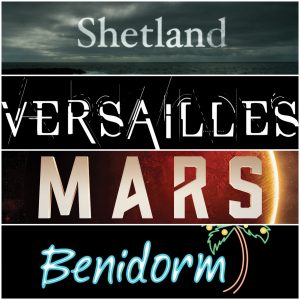 Kriss Dosanjh will play Uncle Molinder in BBC’s The Boy with the Topknot a 90 minute single drama for BBC2 adapted by from Sathnam Sanghera’s critically acclaimed Memoir with Lynsey Miller directing. Joseph May plays Justin Trudeau in The Windsors, Sophie Stone films the key role of Jo Halley in the 4th season of Shetland, Anita Reynolds films Rellik, a new 6 parter for the BBC from the creators behind The Missing and Gary Oliver plays Franco in the ever popular Benidorm. Over in soap land Laura Rogers joins Eastenders as new character Corrine Mandel whilst in Coronation Street the Bethany/Nathan storyline continues to unfold with Chris Harper both brilliant and appalling as the groomer at its centre.